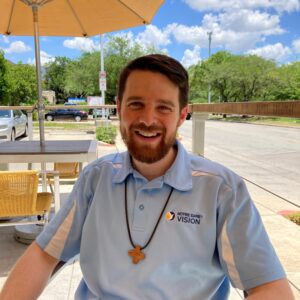 “You looked at me and smiled, so I knew you cared,” Johnny told me one day a few years ago. I had seen him across the street one night as I was driving home from choir practice. I didn’t intentionally smile at him. In fact, I pulled over into a parking lot because I thought my roommate, who was in a different car, had stopped to talk with him. It was dark, so I just wanted to make sure everything was ok. Before I knew it, there he was running to catch up to me and my roommate had driven off. Johnny shared a little of his life with me that evening. He had a part time job but was struggling to provide for his wife and granddaughters. I bought his family dinner. At the end of the conversation, I asked, “Why me? Why did you come running towards me?” There were plenty of other people and cars around. He simply said, “you looked at me and smiled, so I knew you cared.” The next week, there he was again. This time we just spoke and went on. The next week, I was thinking that we could have dinner together this time. I was excited. I arrived and a half an hour passed then an hour… That third week, he never showed up and I never saw him again, but I received much life from those two short encounters and I entrusted Johnny to the Father with hope.
I was raised in Dallas, Texas in a wonderful Catholic family. My journey of faith is a story of slow daily conversions from a faith of doing what I was supposed to do to a faith centered on relationship with God and with those around me. I’m grateful for the seeds of faith and compassion that were planted in me as a child. In college, through the influence of some close friends, I continued to grow and my heart began to be opened to see Christ in the poor, but first I needed to learn to have a personal relationship with Christ in prayer. After college, I moved to Kansas City where I worked as an engineer for five years. My first years there, I spent a lot of time in Eucharistic adoration. I experienced the joys of consolation and the doubts of desolation. Then, I met the Community of the Lamb, a religious order founded in France that has monasteries of little brothers and sisters in Kansas City, Kansas. Most importantly, they showed me that I am loved as I am and that I don’t have to earn salvation or do anything to be beloved by the Father. I became a young adult of the Lamb, a lay member, in 2018. Through weekly gatherings, retreats and pilgrimages with them, I grew in my love of Scripture and in my love for the poor. I had the opportunity to go on mission with the little brothers to the streets of KC and to bring the joy of Christmas to jails, detention centers and soup kitchens. They helped me see Christ in the poor because, well, I am poor.
Through these communities and so many personal encounters with the poor like Johnny and with people who are homeless, I was drawn over and over again to a life of simplicity, a life united with the poor, an abundant life. I spent the past year in Houston, closer to my brothers, sister-in-law and niece and nephews, continuing to work as an engineer. Now I have decided to take a leap of faith. I’m grateful to Source of All Hope for giving me an opportunity to step out into the streets of Baltimore. Only God knows what He has in store for me and the Source community.
If you are reading this, I count on your prayers. If you want to hear more, I’d love to share my journey with anyone who asks. Ask about my street retreat in Austin, TX or about my encounter with Willy in KC. These have been some of my favorites and some of the most impactful. And soon I’m sure I’ll have even more stories to share about the way the Lord is working in my life through the joy and suffering of those on the streets of Baltimore.

Pursuing my calling as a missionary is only possible through the spiritual and financial support of mission partners. Your investment in this mission enables our community to go out and share life with our friends on the street day after day, where we address their biggest source of suffering—isolation—in a way that nobody else can. All the missionaries in our community are nourished and equipped through daily opportunities for spiritual, intellectual, and human formation; moreover, we will spend time in prayer before Christ in the Eucharist, growing closer in intimacy with the Lord and interceding for the needs of this suffering city. Your support makes all the difference, and I want to invite you to invest in both me and my community. If you are interested in partnering with me, please let me know the best way to reach you and I will happily schedule a time to meet! You can email me at wlharris522@gmail.com.

Support my mission by storming heaven with your prayers!
Join My Prayer Team
Translate »