On July 10, 2018, Fr. James Boric launched a bold campaign to make the Baltimore Basilica radically available and bring in missionaries who would literally take Christ out to the streets. His initial letter went viral, and people came out of the woodwork to support Baltimore’s newest initiative—called “Source of All Hope.”

Earlier that summer, Colin Miller, following a strong impetus in prayer, ventured into the streets to encounter the homeless men and women of Baltimore. When Fr. James and Colin finally connected, they immediately shared a vision for a new missionary community, affirming the strong desires of their prayers.

Colin became Source of All Hope’s first missionary on the Feast of Our Lady of Guadalupe—the same day Fr. James was assigned to the Basilica. He was subsequently joined by Nathan Belk, and the mission officially launched on August 15, 2019, the Feast of the Assumption.

A radical life of prayer, supportive community life, consistent formation, and a dynamic mission equip our missionaries to become leaders in Baltimore and beyond. Our missionaries are nourished and equipped through daily opportunities for spiritual, intellectual, or human formation. Our three apostolates—street ministry, bringing Eucharistic adoration to Baltimore, and evangelization—all flow from our daily rhythm of prayer. 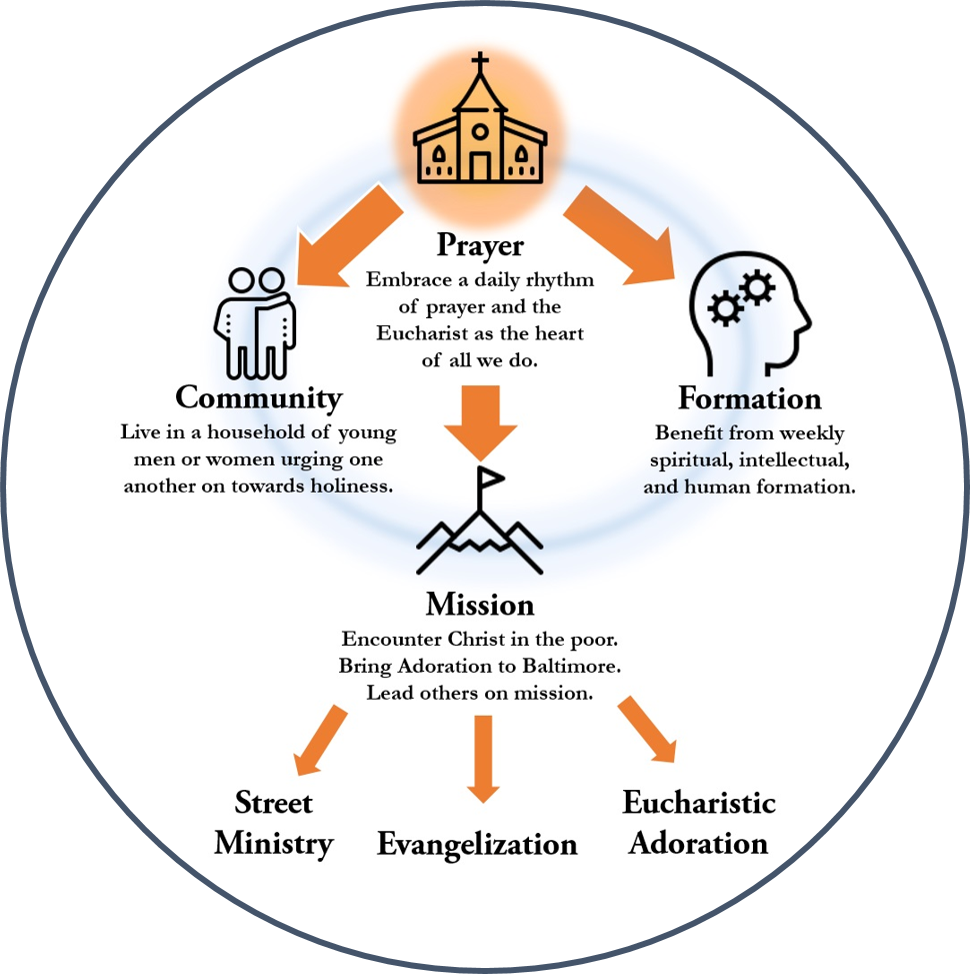 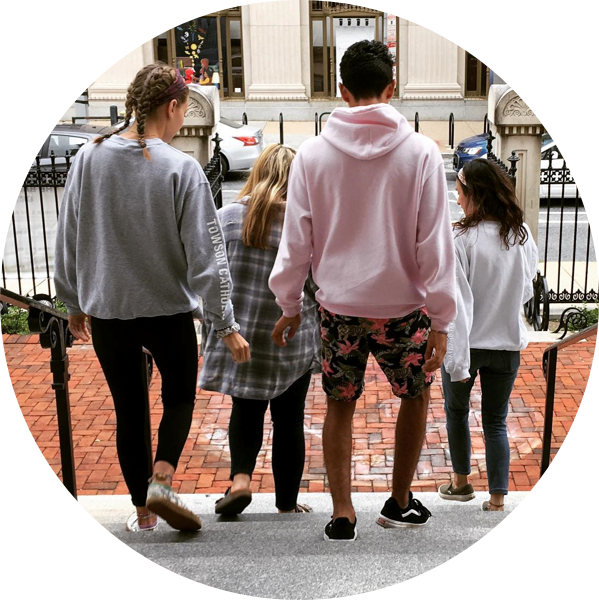 We are a missionary community of young men and women who believe in the transformative power of authentic friendship and who desire to bring Christ into all the places where He yearns to find a home. Each day, we come to know Jesus intimately through a daily life of prayer and Eucharistic adoration. From here, we receive the strength to go out to evangelize, build community, and recognize the face of Christ in our friends on the street. 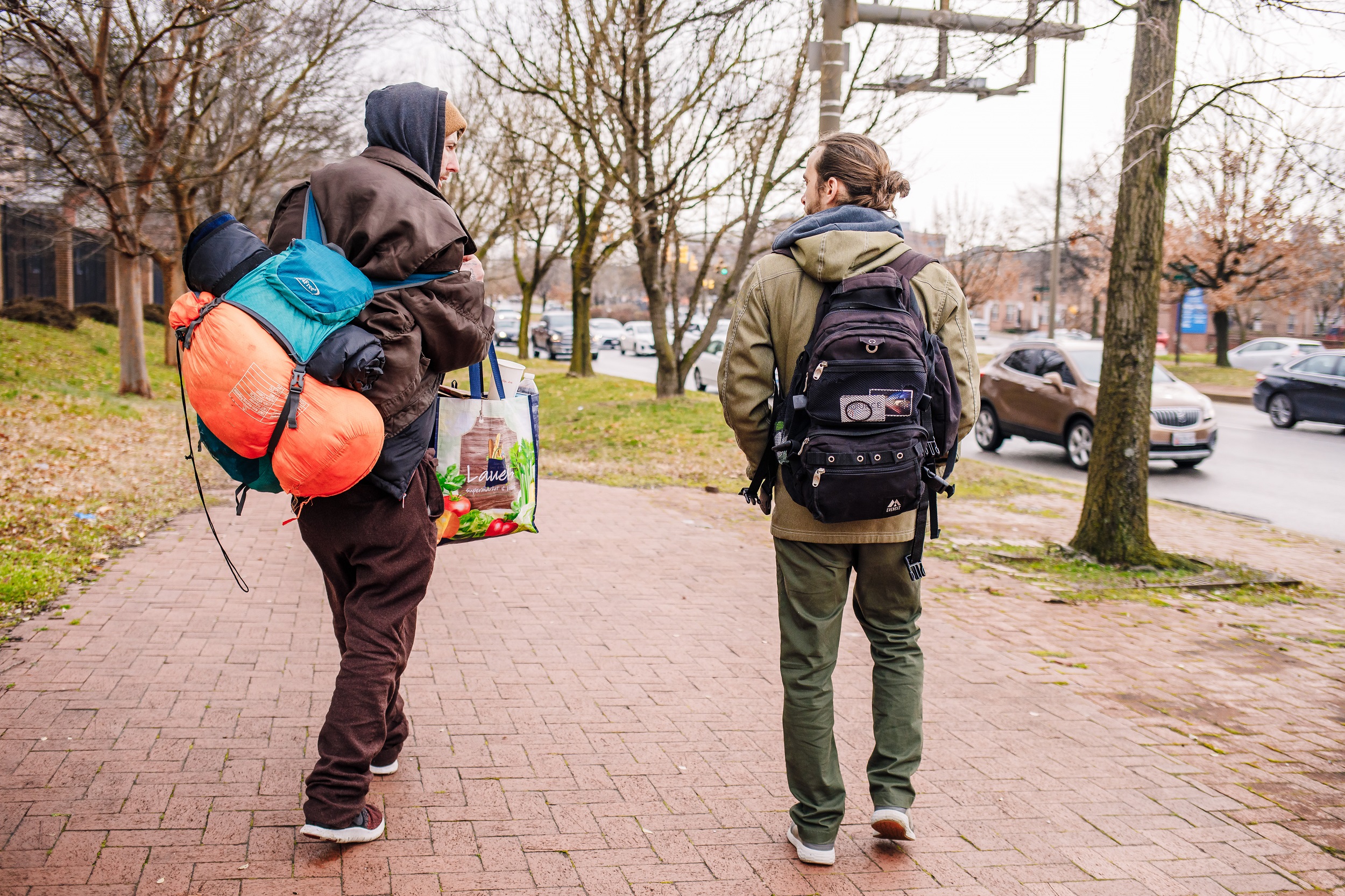 The greatest poverty homeless men and women face is not a physical poverty, but a relational one. People find their way to the streets for many reasons, but nearly all of their paths are paved with broken relationships and burnt bridges. The unforgiving environment of the streets, where they are confronted with hundreds of people who won’t even make eye contact or acknowledge their existence, only enhances their isolation. 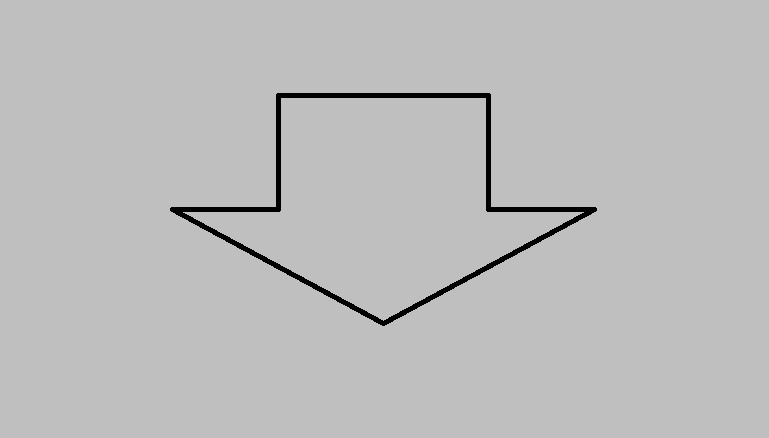 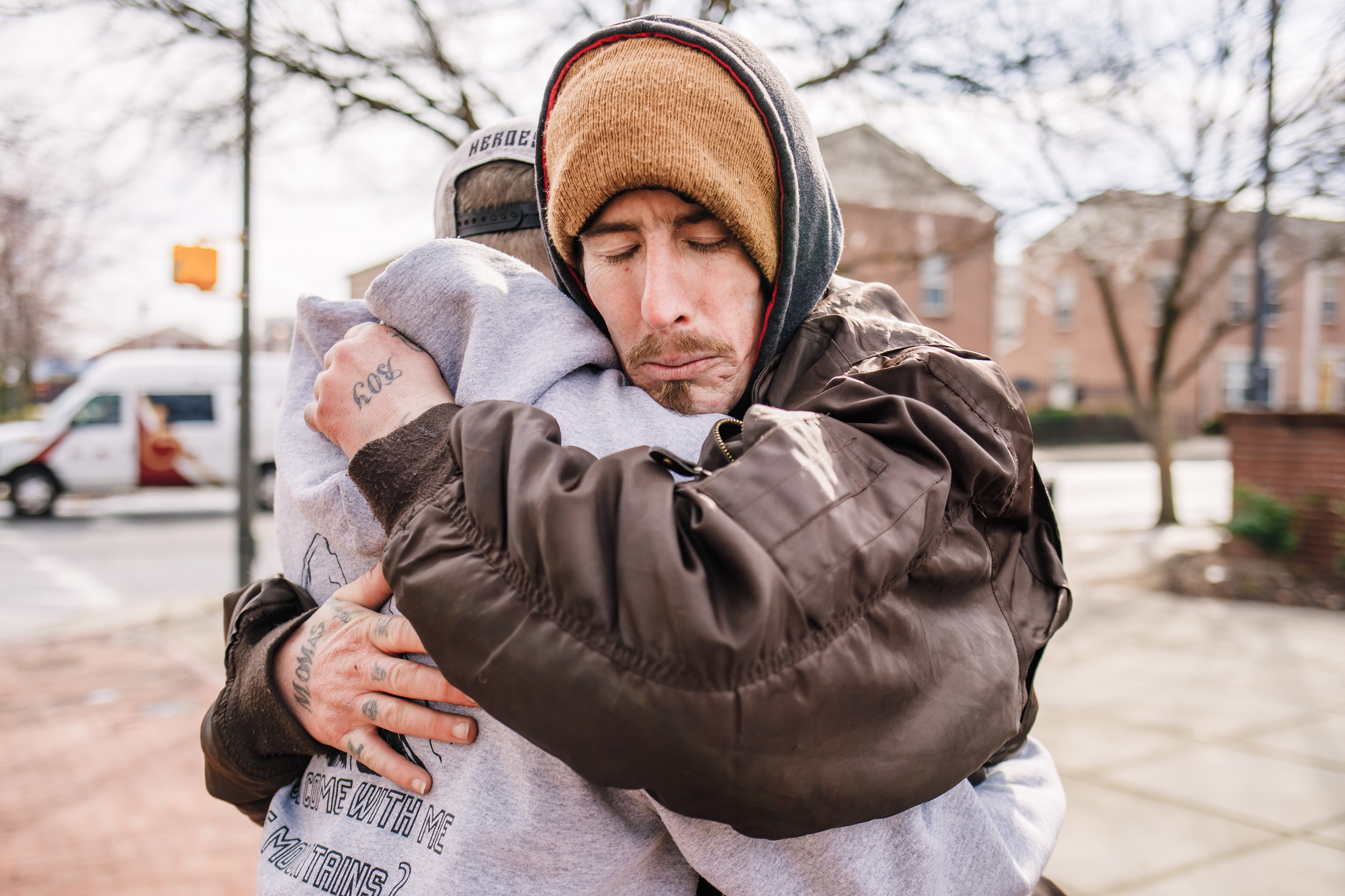 Our solution is simple: friendship. Our ministry is hinged on the power of relationships, which are catalysts for true healing and growth. This is not simply a pious belief—we see it working!

Homeless men and women often know where to access various services. However, they routinely lack the confidence or the motivation to take advantage of the opportunities that are in front of them. When they encounter someone who actually stops to listen to them, to see them, to know them, to love them, they begin to unlearn the lies that have been deeply rooted in their hearts.

This is the power of accompaniment. Although many necessary services are being made available to our homeless friends, almost nobody is willing or able to go out to the streets to share life with them day after day. This is our role as missionaries. 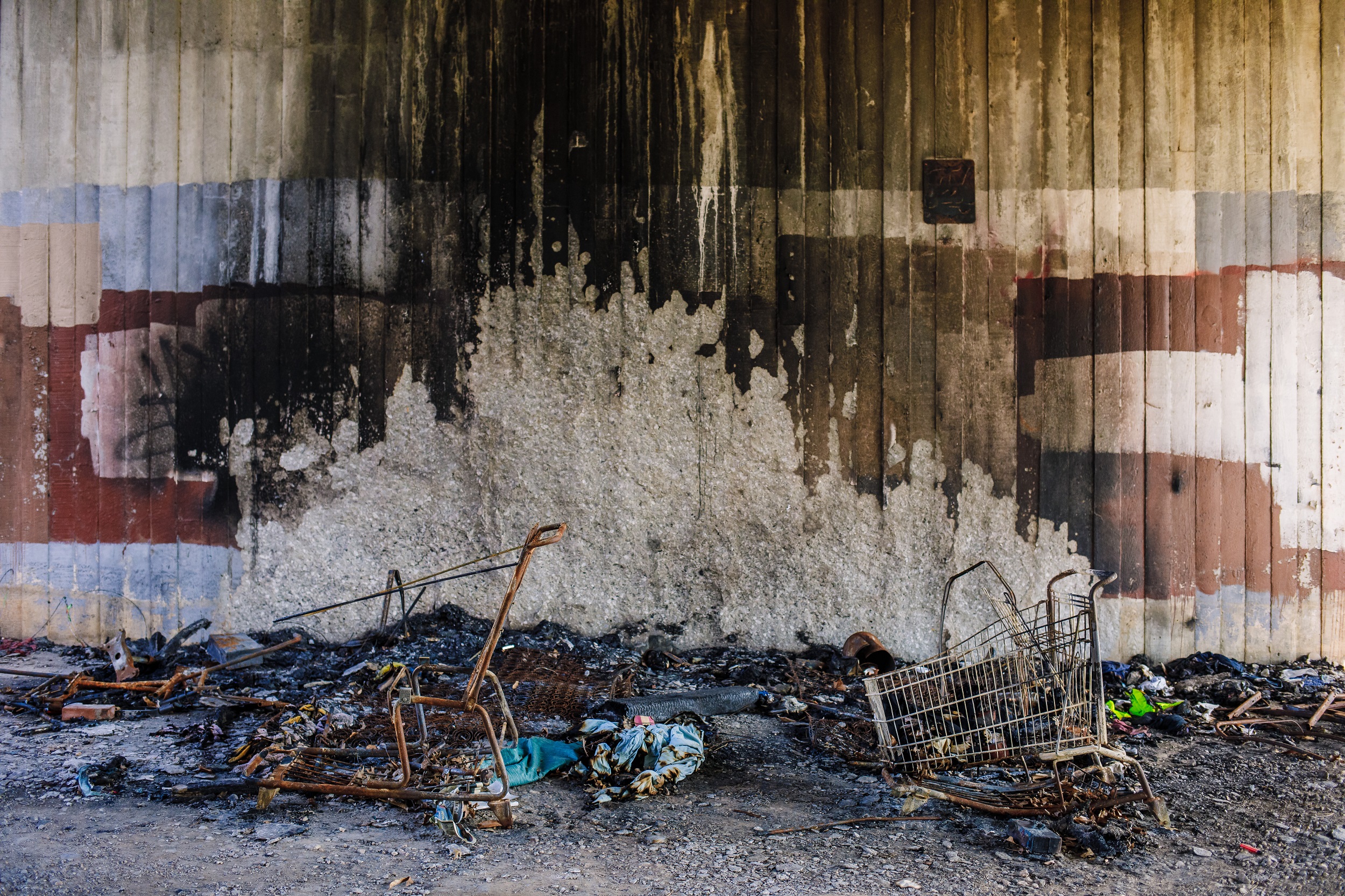 Baltimore At A Low

All it takes is a quick glance at the news to see that Baltimore City is hurting and bleeding. This city has no answer to its chronic plagues of homelessness, addiction, crime, and corruption. Meanwhile, we all live in an increasingly fragmented, self-centered, and fast-paced society. The next generation is more fearful and anxious than ever before, and our lives are so full of noise and activity that we scarcely have time to hear ourselves think.

When Jesus entered into His greatest trial, He revealed the means by which we can fight against the powers of evil and darkness. It was during His agony in the garden that He made a simple request of his disciples: “Could you not watch one hour with me?”

What pained Him most in His time of need? The indifference of the ones who were closest to Him. The apathetic response to his all-consuming love.

What did Christ desire most? An hour of prayer with Him. An hour of Eucharistic adoration.

Jesus laid out a model for Eucharistic Adoration as our essential role in opposing the evils of the world. This is why establishing perpetual adoration in Baltimore is a primary mission of our community. The fruitfulness of our apostolate is entirely dependent on our willingness to spend time adoring Christ in the Blessed Sacrament. We know that we are too weak to effect lasting change; our confidence is hinged solely upon Christ.